An Interview with Owen Atkinson

Owen Atkinson's debut novella, Blood Bounty, will be released through Mannison Press on December 16, 2021. I was thrilled to have the opportunity to chat with him about his fantastic story, as well as discuss all things writing!

So, Owen: tell us a little bit about your new novella, Blood Bounty.

Blood Bounty is a weird west/horror western about a man risen from the dead seeking answers and retribution. Tempted into a life of profitable violence, Garrett is soon betrayed by those he called friend, but no one counted on him coming back. More than just a revenge tale, Blood Bounty has themes of redemption, corruption and manipulation to keep the reader guessing.

What inspired the initial idea for this book?

It started with Garrett. He's been kicking around my head for about a decade, and I always play as him in any game with create-a-character and revolvers. But it wasn't until I played a game called Hard West that I knew what I wanted to do with him. In this game your characters can suffer persistent injuries that eventually heal over, and once healed they still grant you a minor disadvantage but also a bigger advantage. So of course I'd farm these injuries as much as possible until I had a character who by all rights shouldn't have been walking around at all. This got me thinking about how Garrett could have ended up this way, how it would affect him and what he would do about it. The rest followed from there.

Which scene was the most fun to write?

Surprisingly, every scene with Musgrave. In the first draft he wasn't even in the story, but I was lying awake one night and he formed in my mind over the course of about an hour, until I just had to get up and slot him in. His subplot gave me the angle I had felt the story was missing, and it was freeing to write someone so morally neutral.

Which scene was the hardest to write?

The Stranger scene. There was a lot of exposition to fit into a small amount of time, and I had to make a few passes at it to trim it down as much as possible. This being an action-heavy book, I didn't want such a pivotal moment to become a casual chat over tea and crumpets.

What is your favourite genre to read?

Speculative fiction and satire, so it's no wonder that Sir Terry Pratchett is my favourite author. I like the "Black Mirror" of spec fic, showing ourselves as we might be if only one detail changed, or showing us as we actually are but behind a veil of science fiction and fantasy. It's a palatable way to explore what's wrong with the world and how we might improve it.

What is your writing style like? Would you consider yourself a plotter or a pantser?

Definite plotter. I'll write scenes out of order and then place them where they go in the timeline, so that when I fill in the gaps I have checkpoints to head for. Without this structure, the story just flails about like an unattended garden hose.

What's the best advice you've been given about writing?

Before you start, you should know how it ends.

Will there be a sequel to Blood Bounty? Can you tell us anything about it?

There will indeed! Garrett returns, seeking to put right the mistakes he's made. I will be expanding on the curse he suffers, as we've only seen the first stage of what the ritual set in motion. There will also be a new character with their own journey that intersects Garrett's and shares the POV, to remind him (and me) of the regular humans caught in the middle of this supernatural kerfuffle.

And finally, if Blood Bounty was made into a movie, who would you pick to play the main characters?

You can grab a copy of Blood Bounty here:

Owen Atkinson is an Australian author who grew up watching westerns, firing cap guns and reading spooky stories. He used to write marketing copy before he realised it's a lot more fun to just make things up. After a few years of writing, editing and even podcasting for UK video games new website Power Up Gaming, he decided to return to his old friend/enemy, fiction. He currently divides his time between writing stories, creating content for a Dungeons and Dragons sourcebook, and eliciting cuddles from his criminally adorable cats. 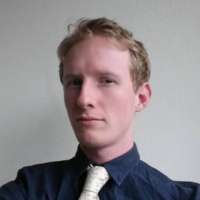