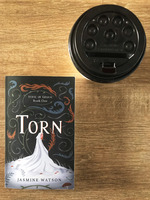 "End the census. Unite the people."

Torn is the first book in The Verse of Grimm series by Jasmine Watson. Here, the world is divided into three realms: The Above, the In Between, and the Below. Ivy Andersen lives in the Above, where people with powers (known as Potens) have been welcome since the War of Unrest, which happened centuries earlier. The different realms are completely separate from each other; Ivy doesn't even believe in the In Between until Jacob Grimm turns up, asking for her help. He needs Ivy and her powers to fight against a corrupt monarchy that wishes to get rid of Potens altogether.

Torn is an exciting fantasy story that combines great world-building with interesting characters. I particularly enjoyed the characterisation of Grimm - Jasmine Watson did a wonderful job creating a dynamic character who kept me on my toes. I must admit, I spent a lot of time trying to figure out his intentions and whether he was being authentic or not...

Ivy is another wonderful character. She's a fairly typical strong female lead, but she has enough flaws (and makes enough mistakes) to keep her from becoming two-dimensional and stereotypical. If anything, I would have loved for the author to explore Ivy's background and thought processes more so we can understand some of her actions better.

This extra characterisation of Ivy could have also helped with the pacing of the book as a whole. Torn moves quickly, with a lot happening in short succession, and I found it a bit hard to keep up with at times. The connections between characters also happens very quickly (which in some cases surprised me), and I felt the author could have drawn things out a bit more so that the relationships happened more organically. It would have also been great to spend more time with Ivy and her friends as they train, as well as really explore the different realms.

In saying that, however, the book still worked extremely well for me. I enjoy fast-paced books (and my stories tend to lean on that side, as well!) so while the book might have benefited from more scenes, I liked that there weren't any unnecessary filler chapters or parts that lagged. I was completely immersed in the story and swept up in the action, and once I was finished, I promptly ordered a paperback version so that I could read it again (and proudly display it on my bookshelf!)

"Torn" is a fantastic debut by Jasmine Watson, who is certainly an author to watch. I'm looking forward to the second book in The Verse of Grimm series!
Share
Tweet
Create your website for free!